The Decade of Centenaries Programme was initiated in 2012 and complements the on-going programme of annual State commemorations. The centenaries programme is broad and inclusive, highlighting the economic and social conditions of the period, the shifts in cultural norms and the experience of the Irish abroad.  The Culture Division, under direction from Minister Catherine Martin, TD, at the Department of Tourism, Culture, Arts, Gaeltacht, Sport and Media has responsibility for the coordination of the initiative. 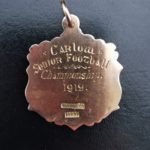 The Decade of Centenaries encompasses the different traditions on the island of Ireland and the initiative provides opportunities to focus on the everyday experience of ordinary people living in extraordinary times, as well as on the leaders and key actors in these events. It also aims to offer fresh insights and constructive dialogue, and to foster deeper mutual understanding among people from the different traditions. The Decade of Centenaries further provides an opportunity to focus on the development of access to historical records and primary sources from the time period, and for working with local and national cultural bodies to bring forward a diversity of exhibitions and public discussions. The aim of the State centenary commemoration programme for the years from 2021 – 2023 is to ensure that this complex period in our history, including the Struggle for Independence, the Civil War, the Foundation of the State and Partition, is remembered appropriately, proportionately, respectfully and with sensitivity.  A specific key objective of the initiative is to promote a deeper understanding of the significant events that took place during this period and recognise that the shared historical experience of those years gave rise to very different narratives and memories.

For community led projects/initiatives/events which meet the selection criteria funding of up to 80% of the cost subject to a maximum grant of € 3,000 will be available. The overall budget is €10,000 and applications will be assessed by an independent evaluation committee on a competitive basis. There is no guarantee of funding for projects/initiatives/events which achieve the minimum eligibility criteria. Applicants must be Tax Compliant and provide a Tax Clearance Access Number (TCAN) and Tax Reference Number and hold their own insurance cover.

The ‘Decade of Centenaries’ All Island History Competition for Primary and Post-Primary Schools 2021/2022:

The decade 2012–2023 is categorised as the ‘Decade of Centenaries’ as it marks the centenary of a number of important historical events and developments that occurred in the period 1912–1923, and which formed a vital role in the formation of modern Ireland. As part of the commemoration programme for the ‘Decade of Centenaries’, students at all levels of primary and post-primary across the island of Ireland are invited, in the 2021-2022 school year, to enter the annual all-Island schools’ history competition. The selected themes have a particular link to events of a century ago across the island of Ireland. The Decade of Centenaries All-Island Schools’ History Competition, for both primary and post-primary, is run by the Department of Education and University College Cork School of History. It is supported by Áras an Uachtaráin, the Department of Tourism, Culture, Arts, Gaeltacht, Sport and Media, and ‘History Ireland’. This competition is intended to complement the history curriculum at both primary and post-primary levels. It can also help support and promote the study of history by students. The competition is entirely optional and is not intended to place any additional burden on schools, teachers or students.

The following video interviews are part of a series examining events in Ireland during the years 1913-1923 as part of the Carlow County Council Decade of Centenaries Programme 2021/22.

Tales from the Archive: Carlow and the Military Archives – Noelle Grothier in conversation with Louise Kennedy:

The Military Archives is the official place of deposit for records of the Defence Forces and collects material from the foundation of the state up to the present day. Any historian that has studied the events of the War of Independence and The Civil War will be familiar with these records, and to their fundamental importance to the study of the period. In this discussion County Archivist Louise Kennedy talks with Noelle Grothier about the holdings of this remarkable Archive, and some of Carlow’s unique records are examined. Noelle Grothier is Head of Private and Oral History Collections and has worked as a civilian archivist in Military Archives since May 2008. She holds a B.A. degree in History and Political Science from Trinity College Dublin and a HDip in Archives and Records Management from UCD. Noelle has responsibility for collections of private papers deposited in Military Archives by veterans and their families. She co-ordinates the Defence Forces Oral History Project and is a member of the Military History and Heritage Forum.

Click here to watch the interview: Tales from the Archive: Carlow and the Military Archives – Noelle Grothier in conversation with Louise Kennedy

The Origins and Impact of County Carlow’s Journey to Independence – Christopher Power in conversation with Dr Shay Kinsella:

Doctor Shay Kinsella speaks to Christopher Power of Carlow Library outlining the origins and impact of County Carlow’s journey to Independence, from the political events prior to the 1916 Rising to the tragedy of the Irish Civil War and how this affected the people of Carlow. Doctor Kinsella, a Carlow native, is a teacher based in County Donegal. As a part of a national series, he is currently producing the definitive history of County Carlow during the revolutionary period in the forth coming book on the county, Carlow The Irish Revolution 1912-1923.

Click here to watch the interview: The Origins and Impact of County Carlow’s Journey to Independence – Christopher Power in conversation with Dr Shay Kinsella

The 1918/19 Pandemic in Ireland – Bernie Walsh in conversation with Dr Ida Milne:

Dr. Ida Milne is a lecturer in European History at Carlow College, St. Patrick’s, and in this interview with Bernie Walsh of Carlow Libraries she discusses the effect that the epidemic of the 1918/19 Spanish Flu had on an Irish society that was in the throes of political turmoil and revolution. Dr Milne examines the experiences of the population in and around Co. Carlow, and also puts the responses and attitudes to the pandemic in its 21st Century context.

Click here to watch the interview: The 1918/19 Pandemic in Ireland – Bernie Walsh in conversation with Dr Ida Milne

The 1918 General Election in Ireland – John Kelly in conversation with Dr Elaine Callinan:

The 1918 Election is seen as one of the most momentous in the history of Irish politics, as it saw the moderate Irish nationalism represented by the Irish Parliamentary Party replaced by revolutionary Sinn Féin as the most popular political movement in the country. In this video Dr. Elaine Callinan, lecturer in History at Carlow College, St. Patrick’s discusses this watershed event in Co. Carlow and beyond with John Kelly of the Carlow Historical and Archaeological Society.

Click here to watch the interview: The 1918 General Election in Ireland – John Kelly in conversation with Dr Elaine Callinan 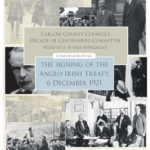 To mark the centenary of the signing of the Anglo Irish Treaty Carlow County Council Decade of Centenaries Committee, on the 6th December 2021, published a commemorative 16 page supplement in The Carlow Nationalist. This production comprised of reports that appeared in that newspaper exactly one hundred years previous, and it was created with the intention of giving readers an insight into the prevailing mood of Carlow’s – and Ireland’s – citizens at this most momentous time. Reams of text have been written on the subject in the century that followed, but this publication presented the events as they unfolded.

In order to give context to the events the articles commenced with the cessation of hostilities with the Truce of July 1921, followed by the progress of Treaty negotiations in London. There then follows the most relevant excerpts in the production: the reportage of the Treaty debates in the Dáil. These were perhaps the most emotive and passionate contributions that our national legislature has ever witnessed. The fall-out of the ratification of the Treaty in January 1922 is also examined, and the consequential spiral into a Civil War, the results of which would shape the politics of Ireland for the century to follow.

The Civil War and the Oral Tradition:

Civil War and the Oral Tradition Part 1: Songs contain the emotions and perceptions of people at a particular time, whereas the history books tell of the facts. In the absence of many songs about the Irish Civil War, presenter Dave Barron looks to America and the songs written by the Irish who participated on both sides of the American Civil War. There he finds emotions and thoughts that are reflected in what little songs and poetry he has found about the Irish Civil War. In Part 2 of ‘Civil War and the Oral Tradition’, presenter Dave Barron explores their importance with Eddie McDonald, who hosts rambling sessions at his home in Clonmore. It’s in places like this that songs from the Civil War are heard. In particular, the songs and poetry that tell the story of the shooting at Sheen where Miley Carroll and James O’Toole were killed. Hear these songs sung by local Carlow people in this documentary.‘Civil War and the Oral Tradition’ is based on the essays of Dave Barron and part of Carlow County Council’s Decade of Centenaries programme and funded by Carlow Council and the Department of Tourism, Culture, Arts, Gaeltacht, Sport and Media

Click here to listen to Part 1 of the documentary: The Civil War and the Oral Tradition

Click here to listen to Part 2 of the documentary: The Civil War and the Oral Tradition

Kevin Barry and the Oral Tradition: 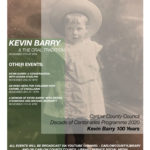 When Kevin Barry was executed, on November 1st, 1920, he had packed a lot of living into his eighteen years on this earth. From his own comments and letters, from comments of family and friends, we know that he played rugby and hurling, he loved dancing, he enjoyed the company of his friends, male and female, and the camaraderie of sing-songs. He had a promising medical career before him, as well as potential for a political career. So, why did he, gladly, give it all away and sacrifice such a full and promising life for Ireland? Kevin Barry and the Oral Tradition examines that influences that moulded his character, gave him the principles and the physical and moral courage to engage in conflict with the forces of the British empire, and, to sacrifice his life and his future for those same principles.

The focus for the Carlow County Council Decade of Centenaries Programme 2020 was on Kevin Barry who was executed over 100 years ago on November 1st, 1920. The main event is Kevin Barry and the Oral Tradition which was a year in the making. A Carlow story told by Carlow people, the documentary outlines the various influences on Kevin as a young boy growing up in Tombeagh, Rathvilly with particular emphasis on the songs and stories which shaped his views and principles. Filmed in VISUAL Centre for Contemporary Art and GB Shaw Theatre, Carlow Central Library and the Barry household, the feature provides for a fitting remembrance of and reflection on a young man who went to his death at a time of great difficulty for this country.

Click here to watch: Kevin Barry and the Oral Tradition

In addition to the Kevin Barry and the Oral Tradition documentary, three other filmed interviews were completed on the life of Kevin Barry. These are available on the Carlow Libraries YouTube channel and can be accessed here:

Click here to watch: A Memoir of Kevin Barry with Síofra O’Donovan and Michael Moriarty

Click here to watch: An Irish Hero for Children with Carmel Uí Cheallaigh and 6th Class in Rathvilly NS